Its been such a while since I have made any posts on this blog. I apologize.

Well, we have been busy. We traveled to Phoenix twice, once in December 2015 for the Pueblo Grande Show and just a few weeks ago for the Heard Show. We are new to the market there in Phoenix, so this was really and introductory show for us. We had sales, but not the larger number sales we get in our regular market areas. I did mange to sale some paintings at wholesale which I understand are being merchandised in Texas, and they are selling! That is a good. I am considering concentrating sales and promotion though major galleries in the high art market areas of Santa Fe, Scottsdale, and San Francisco. I will just play things out and see what develops.

On the personal side, I also completed my degree in Business in December, and managed to be selected as the 2015-2016 Honored Student. Commence will be in June in Albuquerque, we are looking forward to that.

Our next show is most likely going to be the Pueblo of Jemez Red Rocks Arts and Crafts during Memorial Day weekend.

Below are two of my most recent paintings. I really enjoyed working on these projects. Both are acrylic on canvas with use of metallic acrylic paints. The Koshari clown image is entitled "What's Next?". To those who are familiar with the clown culture, this clown is in between behaviors and simply observing and putting up a show. His empty hands are the message of this thought.  This image came out quite striking because there is a unique effect. The face of the clown appears almost skeletal or like a skull from a distance, yet as you near the painting, you can actually see a face of a man. The falling leaves are painted with bronze, gold and metallic yellow. I wanted this image to appear real, but when closely observed, realize it is a painting. I used a very loose style to get there. 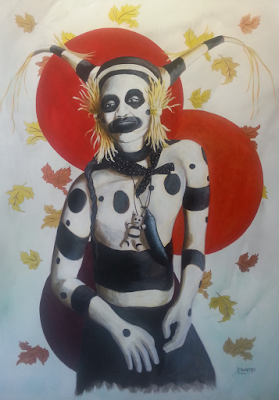 Winter's Healing on a grand scale. This painting is 4' X 5'. I had been doing the WH series on 18" X 22" canvases before this one. I greatly underestimated the time and use of paint to do this. It's been a while since I completed one this size. I was frustrated several times because I had proportions incorrect and the lighting in my house was not adequate at night to show the entire canvas. Therefore, I had to paint during the day most of the time. There is a lot of movement achieved in this painting. I wanted to ensure I capture what the WH series is about like I normally do. I feel I got it! 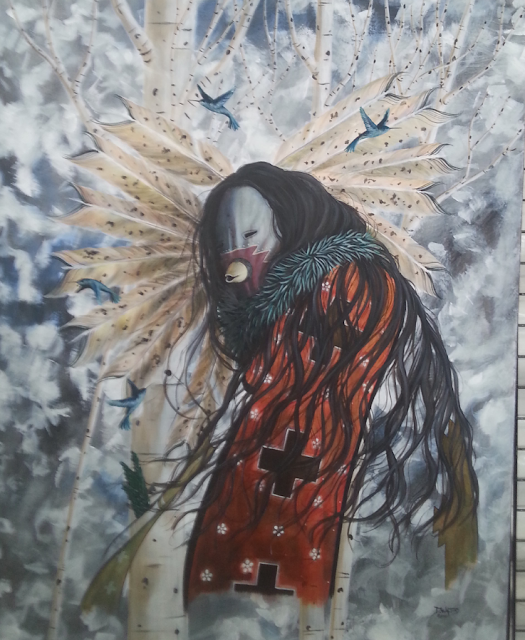 I hope to see you on here too.. have a great day!